More often than not, we focus on the tragedies, that the good stories, slip past us unnoticed. It’s not so very different in the world of wildlife conservation. I wish to tell you one such happy story, the story of a quaint place called Rangayyanadurga, in the dry district of Davangere district in south-interior Karnataka.

Davangere is known for many things like textile industry, butter dosa, wildlife conservation is not one of them.  This article is about how a successful conservation story was made possible through partnership of wildlife biologists, local conservation enthusiasts, elected representatives and the forest department.

The story starts in 2008, when wildlife biologist Sanjay Gubbi along with local conservation enthusiasts, Ravi Kumar, doctor in a local hospital and Srinivas, a local journalist, first noted the presence of four-horned antelope (FHA), a shy and secretive antelope, in the dry deciduous and scrub forests of Rangayyanadurga. The publication of the discovery in scientific journals and press alike brought attention to this once neglected forest. Following Gubbi's discovery of the FHA and his proposal to the government and local leaders including the Member of the Legislative Assembly put the wheel on roll to declare Rangayanadurga as a wildlife sanctuary.  Importantly Gurusiddanagoudar, a senior political leader and a nature lover, put his weight behind the idea and convinced several other local leaders.

Forest officers Dilip Kumar, B.K.Singh, Meera Saxena, M.H.Swaminath ensured full support for the cause. These honest, green to the core officers, ensured that the notification to declare the area as a wildlife sanctuary (77 sq km) came through.

The combined effort led to the declaration of the first ever wildlife sanctuary in India for the protection of a lesser known species such as the FHA in January 2011. The declaration sailed through despite severe lobbying by vested interests, including some “green energy” companies who were vying to setup windmills in Rangayyanadurga.

This success story sets an excellent example for a model where in wildlife biologists, forest officials, conservation enthusiasts and importantly political leaders could achieve remarkable results for wildlife if they worked in tandem. It is essential for wildlife biologists to convince the other parties involved, as can be seen in the case of Rangayyanadurga, if their research results have to make a real difference to on-ground conservation .

The present scenario:
Basavraj has been working in Rangayyanadurga State Forest (RSF) in Davangere District for all his life. When we met him last year, he was still a temporary watcher, albeit with passion for wildlife and a will to protect Rangayyanadurga. He could name almost all the trees in Kannada, patrol the vast area even as others are having a shut eye. Today he is promoted to permanent staff position and happily tells us how the sanctuary declaration will help him to conserve the land for the diminutive FHA, curtail Illegal timber collection, poaching, mining etc., when various wildlife policies will be upheld under the wildlife sanctuary status. Post declaration, permission given to windmill installations have been cancelled.
However, the forest department is yet to transfer this area to the wildlife division which is very critical in halting poaching of FHA and degradation of the habitat. The territorial division which currently manages the area is not geared up to handle poaching incidents while they focus more on developmental and forestry activities. The transfer needs to happen soon if this areas’ wildlife population has to be saved. 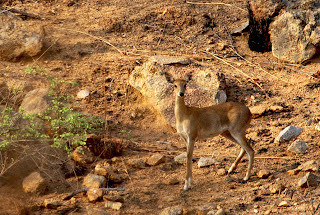 The four-horned antelope  or chowsingha (Tetracerus quadricornis)  is a species of small antelope found in the open, dry, deciduous forests in hilly terrain in India and Nepal. It is the smallest of the Asian bovids with distinctive permanent four horns on the male FHA. It is listed as Vulnerable by the IUCN Redlist due to habitat loss depicting the importance of habitat protection.

They tend to remain in areas with significant vegetation cover from tall grasses or heavy undergrowth, and close to water supply and stay away from human-inhabited areas.

Four-horned antelope are generally solitary animals, although they are occasionally found in groups of up to four individuals. Like other antelopes FHA  also makes piles of droppings in their territories.